Val Bettin (born August 1, 1923) is an American actor and voice actor, known for using an English accent in all of his roles. He is perhaps best known for voicing Dr. David Q. Dawson in the 1986 Disney animated film The Great Mouse Detective and the Sultan in The Return of Jafar and Aladdin and the King of Thieves, the two direct-to-video sequels to Disney's Aladdin as well as the TV show, taking over for Douglas Seale. Bettin also hosted The Storyteller, a children's show on Chicago television in the late 1950s. 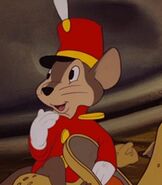